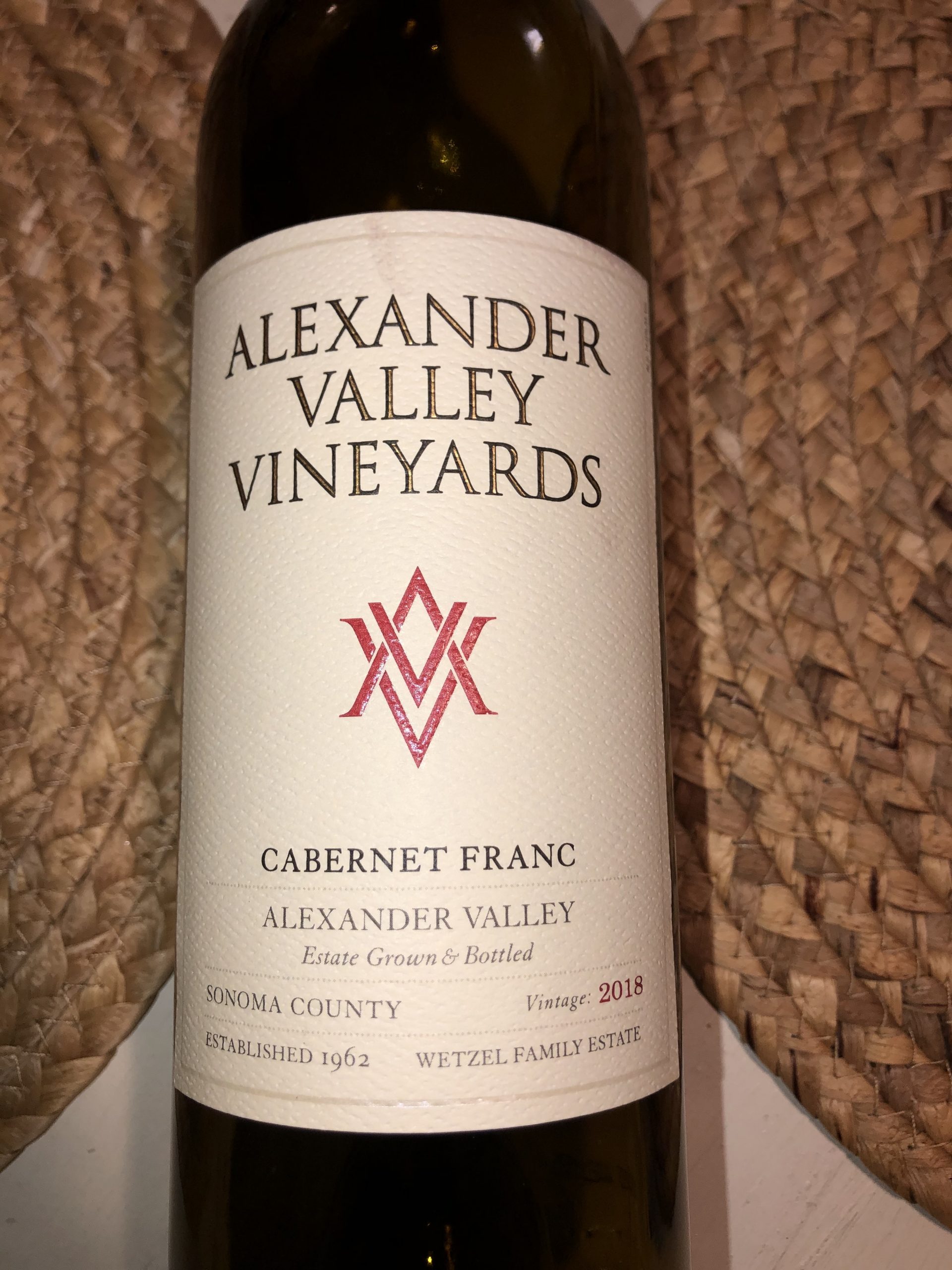 Before trying this Cabernet Franc, a coworker described it as being very funky. As a guy that tends to like funky foods and flavors in general, I put it at the top of my list of “Wines to try.” Soon after, I bought and opened this adventure of wine. Right from the start, I could smell the “funk,” even though I had no idea what exactly he had meant. Dark fruits, oak, and bits of spice and chocolate immediately jumped out at me. These aromas stayed consistent on the tongue, though some cherry notes seemed to poke their way out, even if only for a second. Alexander Valley Vineyard’s Cabernet Franc opens up into even richer, more complex, and tasty notes as it decants over the course of an hour and a half.

The climate and terroir of Alexander Valley are key to the Alexander Valley Vineyards and the Wetzel Family Estate. The vineyards seem to lie just around the area where the Alexander Valley meets the Mayacamas mountains and extends alongside both sides of the Russian River. This location provides a variety of elevations and climate factors that complement and contrast each other to create a great, diverse terroir.

Wine drinkers seemingly overlook Cabernet Franc for its child grapes, Cabernet Sauvignon and Merlot, or simply not widely known. The grape is found across the globe but is best known for its use in French Bordeaux. While I would not say they are rare, single-variety cabernet franc wines are far less common than other varietals. Cabernet Franc single-variety wines are most commonly produced in France, Italy, the United States, and other places such as Chile, Spain, and Argentina. Varying climates and terroir in these countries’ wine regions can create very different cabernet francs from one another. Some may be more fruit-forward with notes of strawberry and raspberry, such as in California, while the more traditional cabernet franc in France will be more herbal, peppery, and earthy.

Plum, pepper, and oak jump out in a chaotic, but beautiful combination. On top and woven in between these aromas, smoke, and chocolate linger about. The smoke and chocolate notes seem to disappear as soon as you realize they are there.

Over the course of decanting for an hour and a half and checking at different intervals, the aromas develop very nicely and unexpectedly. The earthy funk seems to become more present and takes center stage with the oak aromas, leaving the dark fruits fighting for room. Eventually, the earthy and dark fruit aromas balance out, leaving pepper; bright, ripe cherries; and spices sprinkled throughout.

This medium-bodied, velvety wine tastes even better than it smells. While dark fruit aromas are the main show, at least initially, on the nose, they take the back seat once the wine reaches the taste buds. The funky earth notes stand out with plums and oak complementing them. On top of this, we get hints of pepper and chocolate that mesh very well together.

As the wine aerates, the dark fruits become a calm, but delicious undertone, while the earth and oak notes take over as the life of the party. The funk I keep mentioning is hard to explain, but you may have some understanding if you have any experience with funky wines. A review described it as being like a wet forest floor. Before that, I had no idea what that could possibly mean, but it made complete sense after trying this beauty. Also, the longer it decants, the chocolate notes become more consistent and pronounced, transforming from a milky, mocha chocolate to dark, sharper chocolate.

Alexander Valley Vineyard’s Cabernet Franc is a chaotic, yet wonderfully structured mashup of earthy funk, dark fruits, and chocolate with pepper and spices in between. If you do not notice the sturdiness of the wine during the first few sips, you will definitely notice it as the wine aerates and opens up. If you want an adventure of a wine that can only be described as organized chaos, this wine is the one.