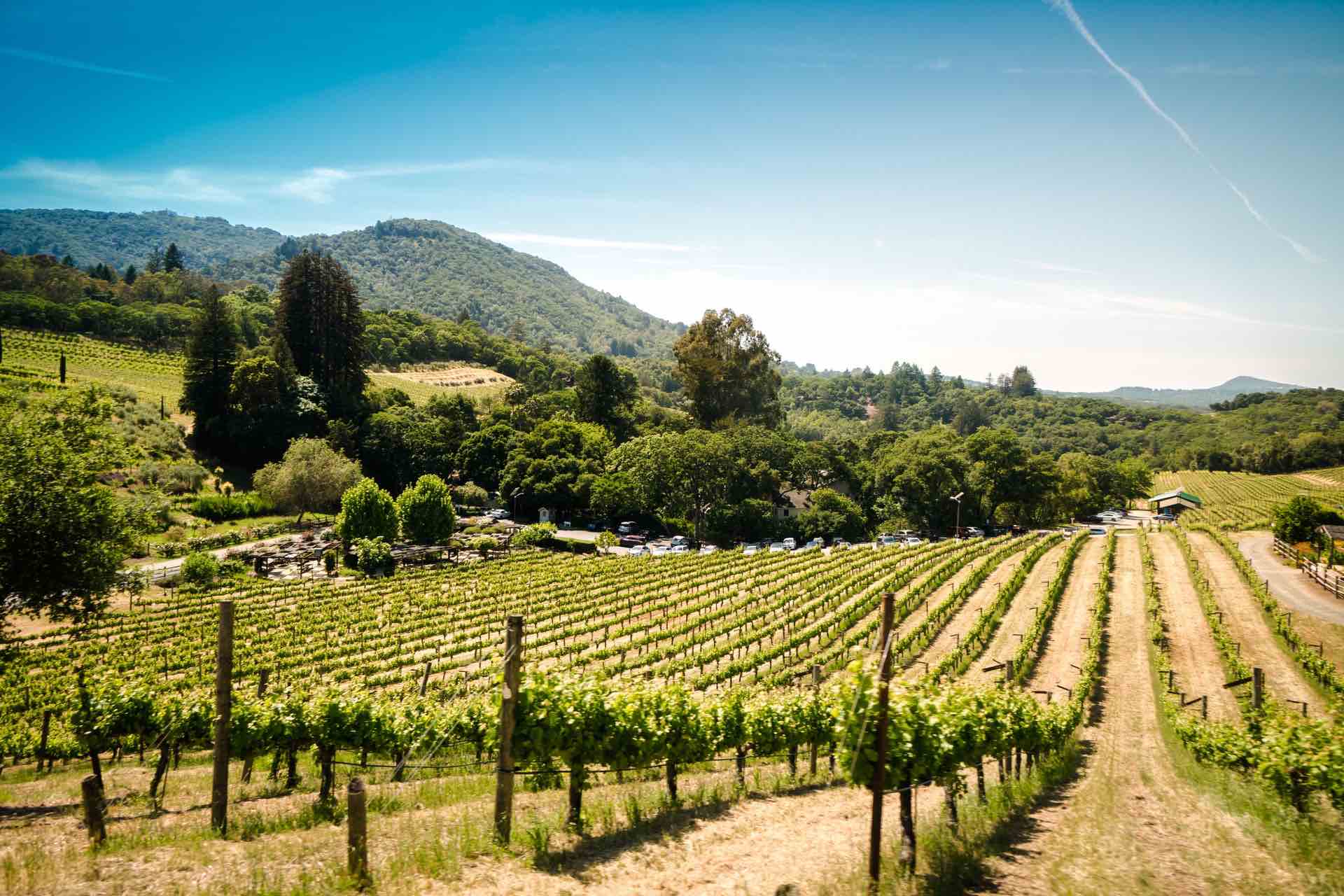 Like many new world regions, the United States has a long, rocky wine history, but the modern-day product we all know is relatively young. From the founding of the first commercial winery in 1798 in Nicholasville, KY, to federal prohibition in the ’20s, and finally, the Judgement of Paris bringing the United States into its modern era in 1976; The United State’s journey with wine is one of experimentation and trial & error.

While California has historically and is still the country’s wine capital, all 50 states currently have commercial wineries and vineyards. Some, such as Oregon and Washington, are even coming close to California’s reputation, while others are also making significant strides. While Cabernet Sauvignon, Pinot Noir, Chardonnay, and Sauvignon Blanc are some of the most commonly produced and best-known grapes from the US, the country produces an extremely diverse variety of grapes and styles.

While the continent’s wine history goes all the way back to when Vikings referred to it as Vinland in the 10th and 11th centuries and the French Huguenot monks in the 16th and 17th centuries, things did not really pick up until the mid-1700s with the discovery of the Alexander grape.

The Alexander grape was founded by James Alexander, the gardener of Thomas Penn’s estate, in the woods of his property. It is believed to be a hybrid cross of Labrusca and Vinifera, though the latter grape is still up for debate. The Alexander grape grew extremely well and produced great wine that was in the realm of familiarity and palatability for the largely European population.

While the first commercial winery, “First Vineyard”, was founded in 1809 around modern-day Nicholasville, KY, it did not last due to bad frost. On a better note, the first successful commercial winery was founded by Nicholas Longworth in 1830 around Cincinnati, Ohio, which found its success in sparkling wine made from the Catawba grape. By the mid-1800s, the United States was at the beginning of what it has come to be today.

Pleasant Valley Wine Company founded the country’s first bonded warehouse in 1860 in the Finger Lakes region of New York. Finally, Charles Krug founded the first commercial winery in California in the little town of St. Helena in 1861. If you’re a big fan of sparkling wine, then you likely know who and what Krug wine is, as it’s considered world-class sparkling wine today. Finally, to set the stage, Gustav Niebaum founded Inglenook Winery in Rutherford California. He produced Bordeaux-style wines that drew attention from around the world. He arguably started the trend of trying to imitate French and other European-style wines that would go on until the later 20th century.

Winemaking continued until the start of prohibition in the 1920s. Lasting until 1933, prohibition devastated the American wine industry and crippled it long after the policy was repealed. Many wineries struggled and went under, though many did not. Wineries found other ways to keep their vineyards and practice above water such as selling grapes (for consumption and fermentation), producing wine for “religious” purposes, and growing and selling other crops. While wineries still existed, though in smaller quantity and under tighter control, the United States did not start producing quality wine again until the 1960s.

In the 1940s, the Mondavi family bought the Charles Krug winery, and for decades they maintained the operation and slowly improved upon it. In 1965, after Robert Mondavi got into an argument with his brother, Peter, about how best to operate Charles Krug and which direction to take, he left the Charles Krug company.

Robert Mondavi used the vineyard land he received in the family’s drawn-out legal battles to start the Robert Mondavi Winery in Napa Valley in 1966. They quickly became known for great Cabernet Sauvignon and Chardonnay, and even developed a new style of Sauvignon Blanc, Fume Blanc. The Robert Mondavi winery would continue to accomplish producing superior wine, even collaborating with Mouton-Rothschild in 1979 to create the coveted Opus One, which goes for hundreds of dollars upon yearly release. Through decades of ups and downs filled with family disputes and financial issues, Robert Mondavi was eventually to Constellation for $1 billion.

A famous wine tasting took place in Paris in 1976. It was expected to be an exciting, but fairly normal wine tasting consisting of some of the best French Bordeaux and Burgundy. It was organized by Steven Spurrier, a British wine broker that owned a wine shop and school in Paris, and he was mostly only hoping to build some excitement and business for his shop and school.

Spurrier and his wife had been to some of the newer California wineries earlier in the year. After finding some they loved, such as Stag’s Leap and Chateau Montelena, he had them shipped back for this eventual wine tasting. This event in the wine tasting was named The Judgement of Paris, as it pitted world-class French wines against newer, relatively unknown California wines in a blind tasting. A 1973 Chardonnay from Chateau Montelena and 1973 Cabernet Sauvignon won the highest ratings for their respective categories in white and red wine, and a handful of other California wines placed in the top five over the French wines. This caused a variety of reactions among wine critics, producers, and the panel of French Judges themselves, but most importantly, it is the defining point that made California wine what it is today.

Today, commercial wine is produced in all 50 states to different degrees. While California remains the capital of American wine, states such as Washington and Oregon are nearly on par in reputation and quality. Other states such as New York, Texas, Arizona, and Missouri are on the rise as well with some having newer wine histories and others returning to their routes. The American wine industry is extremely large and diverse due to the sheer size of the country; having different state laws for all 50 states; having a variety of grapes and styles.

Honestly speaking, California could have hundreds if not thousands of pages written to explain its regions and AVA’s. Due to the state’s reputation and that of certain regions and the vastness of it all, we will be adding more over time. California can be broken down into four regions: North Coast, Central Coast, Central Valley, and South Coast. Within these, there are countless other regions and AVA’s. Here is a brief overview of the state’s most popular and well-known regions.

If we are going to call California the wine capital of the country, Napa Valley is the poster child and heart of the state. Just the name “Napa Valley” carries weight on its own by means of reputation and quality. Napa Valley is only 30 miles long, but it still manages to include a range in climate and elevation with a handful of mountain and valley AVA’s. Historically and even today, Napa is most known for its Cabernet Sauvignon and Chardonnay, but plenty of other varietals are grown here as well. Napa’s appellations include:

Today, Sonoma County can stand its own in terms of quality and reputation next to its neighbor, Napa, at a fraction of the cost. The region spans 1,786 miles and contains around 60,000 of planted vine acreage. It has a variety of climates with some being hot and humid, and others more cold and dry. Like Napa, it produces world-class Cabernet Sauvignon, Chardonnay, and Pinot Noir. If you’re looking tobuy a nice California bottle, Napa Valley might be your instinctive choice, but Sonoma can provide just as much value at what can end up being a significantly cheaper price.

The Central Valley is not an official AVA or wine region, but it is often viewed as one and for obvious reasons. The Central Valley is made up of two valleys, the San Joaquin and Sacramento Valleys, and they are joined together by the Sacramento–San Joaquin River Delta. The central valley also produces the large majority of wine-producing grapes in the state. There are a handful of relatively unknown AVA’s here, but the most well-known is Lodi, which has exploded in popularity in recent years. Lodi is known for producing bold, jammy, fruit-forward reds such as Cabernet Sauvignon and Zinfindel as well as Chardonnay and other acidic white wines.

Currently, the Central Coast has a handful of appellations that are underrated and overlooked. Many do not have the big names and reputations of Napa and Sonoma, but they can carry the same weight in terms of quality. The Central Coast stretches from San Francisco to just below Los Angeles and includes many coastal AVA’s and a handful of notable AVA’s more inland. Chardonnay and Pinot Noir are the big grapes here, though others such as Cabernet Sauvignon and Syrah are also worth noting.

Oregon has over 700 wineries and produces the fourth most wine in the United States. In the past few decades, Oregon has become known for producing some of the best Pinot Noir in the world, particularly in Willamette Valley. Willamette and Pinot Noir largely dominate the state together. The only other AVA that is contained within the state is the Southern Oregon AVA. While Walla Walla and Columbia Valley are mostly in Washington, small bits are included in Oregon where Cabernet Sauvignon and Syrah dominate the scene. Finally, there is Snake River Valley that drifts into Idaho.

Willamette Valley is the largest AVA in the state and includes a little over 60% of the state’s wineries. The region has been growing since the latter portion of the 20th century and is known around the world today for its Pinot Noir. Willamette Valley also produces a good amount of Pinot Gris as well. There are five smaller sub-regions within Williamette with the most popular being Dundee Hills.

Though Southern Oregon officially became an AVA in 2004 when Rogue Valley and Umpqua Valley joined together, the region collectively has the oldest wine history in the state, dating back to the 1850s. There are a handful of other smaller appellations in southern Oregon but these two make up most of it. Pinot Noir, Pinot Gris, Riesling, and Tempranillo are the most common grapes and wine produced here.

Columbia Valley contains 99% of the state’s vineyards and has 10 sub-AVAs within it with nearly 60,000 acres of vineyards. It shares some of these with other states such as California, Oregon, and Idaho. The state grows many varietals but Cabernet Sauvignon, Merlot, Syrah, Chardonnay, and Riesling make up the large majority.

Keep in mind, that all 50 US states produce commercial wine. For most, they don’t make it outside of their respective states, but there is a handful that is coming into the mainstream. Keep an eye out over the next six months, as we hope to update and include all states. In the meantime, some states to check out that produce great quality wine, but don’t get the national and international recognition they deserve, include Texas, New York, Michigan, Arizona, and New Mexico.