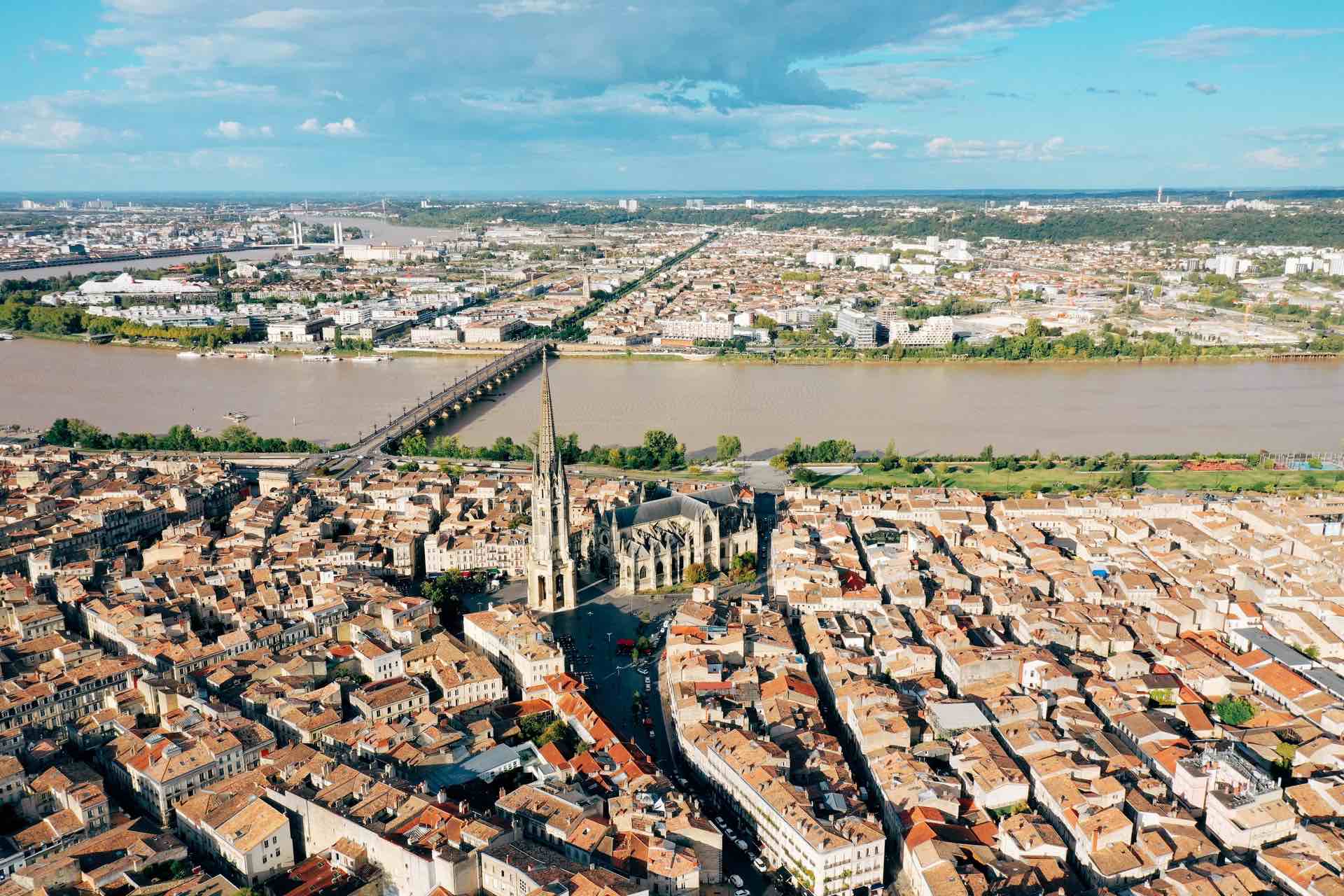 At first glance, Bordeaux may seem fairly simple and straightforward. St. Julien, Pomerol, St. Emillion, Medoc.. Cabernet Sauvignon, Merlot, Malbec.. oh, and even Cabernet Franc.. it’s all just Bordeaux, right? Yes, it is technically all Bordeaux, but there are climates, grape varietals, and classification systems that make a huge difference. These differences can best be grouped and understood by the Left Bank and Right Bank of Bordeaux.

Europe’s largest estuary, the Gironde, and its two connecting rivers, the Dordogne and Garonne, divide the region into the Left Bank and the Right Bank. If someone says that one is better than the other, then that person is lying. They are both distinct in nearly every way with the “Bordeaux” label and France being their similarities. It all comes down to personal preference.

The Left Bank can be found south of the Garonne river and has historically been perceived as the better of the two. This false perception is likely due to the 1855 Classification of Bordeaux, which only ranked the Left Bank and completely ignored the Right Bank.

While all Bordeaux wines are going to be red blends, the dominant grape here will be Cabernet Sauvignon. These blends will also include Merlot, Malbec, Cabernet Franc, and Petit Verdot. Its main regions include Medoc, Haut-Medoc, Graves, and Sauternes & Barsac. There are a few other widely encompassing AOCs alongside many other famous AOCs within these, including the five 1st Growths.

The Medoc area contains some of the most famous regions in Bordeaux, and the world, including St-Estèphe, Pauillac, and St-Julien. Medoc also contains four of the five First Growths which were established by the 1855 Classification. These are some of the most coveted and expensive wines in the world. In no particular order, these include Chateau Margaux, Chateau Mouton-Rothschild, Chateau Lafite Rothschild, and Chateau Latour.

The term Medoc can refer to the small AOC of Medoc in the northernmost part of the Left Bank. It more commonly refers to the Medoc area as a whole. The region of Medoc stretches from the Atlantic ocean and the entryway of the Gironde to the northern outskirts of Bordeaux, the city. The Medoc AOC is the biggest on Bordeaux’s Left Bank with 14,190 acres under vine.

Graves is the birthplace of Bordeaux wine, as we know it. It is believed to be the site where the Romans planted the first vineyards in the 12th century. The area led Bordeaux wine until Napoleon III’s 1855 Classification put the spotlight on Medoc. This classification system was not completely bad for Graves, as the area still claims one of Bordeaux’s First Growths, Haut-Brion in Pessac-Leognan. This isn’t to say that the region lost its place, as Graves still remained popular throughout the centuries. In 1987, Graves was officially split into two AOCs, Pessac and Leognan. The region is still commonly referred to as a whole, though.

Graves stretches from the southern outskirts of Bordeaux to the city of Langon. It runs along the Garone on its eastern side and a few other regions of Bordeaux on its western side. It covers around 8,650 acres of vineyards. Coincidence or not, the region’s name reflects its terroir. The soils are filled with gravel, pebbles, and other minerals which are surprisingly great for growing grapes. Wine from Graves can come at a great value, though the prices can also soar.

Sauternes has an interesting history filled with luxury and exclusivity. The sweet, sweet wine produced here has gone from being considered a desert aperitif to a meal-wine, and now it is everything in between. While Sauternes is considered to produce the best sweet wine in the world, it is also home to one of the most famous and beloved wine producers in the world, Chateau d’Yquem. Their wines are oftentimes considered the best sweet wine in the world and the best wine in Bordeaux. Chateau d’Yquem is the only producer in the Sauternes & Barsac Classification to receive the Premiere Cru label which is on par with the 1st Growths.

Sauternes is located south of Graves along the Garonne river, and it runs fairly far inland. The region solely produces sweet white wine made from Semillon, Sauvignon Blanc, and Muscadelle. What makes Sauternes wine special is Botrytis Cinerea, which is a fungus. It is commonly called “Noble Rot”, and it requires very specific growing conditions that the region meets. This fungus affects the grapes in such a way that the aromas, tastes, acidity, and sugars are all different than what you would normally get from these grapes.

Barsac is a commune in Sauternes that has nearly gained equal footing with the region. While there are a number of notable AOCs within Barsac, the characteristics of its wine are what differentiates the AOC. The sweet wines here are primarily made from Semillon and are known for being lighter and fresher than surrounding areas.

The Right Bank is north of the Dordogne river. While it may seem less organized and less diverse than the Left Bank, its wines are of equal footing. The Right Bank is made up of Bordeaux blends with Merlot as the dominant grape. The blending grapes usually include varying percentages of Cabernet Sauvignon and Cabernet Franc. The two primary AOCs are Saint-Emillion and Pomerol, and unlike the Left Bank’s 1855 Classification, there is no ultimate ranking for both.

Saint-Emillion is arguably the oldest wine-producing region of Bordeaux, dating back to 1 B.C. The region has steadily progressed and endured through thousands of years. While it received official recognition as an AOC in 1934, it did not create a classification system until 1955. It is called the Saint-Emillion Classification and has been updated six times since its inception. It includes four tiers of wine, which has been the center of wine politics throughout the decades. The politics of wine has threatened the credibility of Saint-Emillion’s classification system with three of its four biggest Chateaus opting out of the next reclassification in 2022.

Saint-Emillion’s top producers, some of which have left, included Chateau Angelus, Chateau Chevel Blanc, Chateau Auson, and Chateau Pavie. These were the four producers granted the highest level of classification. Only Chateau Pavie remains now, as the others have left. There are 14 Chateaus at the next level under, then 85 Chateaus, then hundreds under them. Great quality wines can be found at any of these tiers, but the prices soar at the top levels.

Pomerol has become increasingly sought after and famous in the past few decades. It received AOC status in 1936 and is the smallest AOC in Bordeaux with only 1,977 acres under vine. It has historically produced Cabernet Franc and white grapes, but its AOC status changed that to only Merlot, Cabernet Franc, and Cabernet Sauvignon. Pomerol has no classification system, but it still lays claim to some of the most expensive wines in the world. These include Chateau Petrus, Chateau Lafleur, and Chateau Le Pin. The wines are known for being very well structured and balanced with a velvety texture. They can range anywhere from $50 to $15,000. Even at any price under $100, a Pomerol is guaranteed to be great.