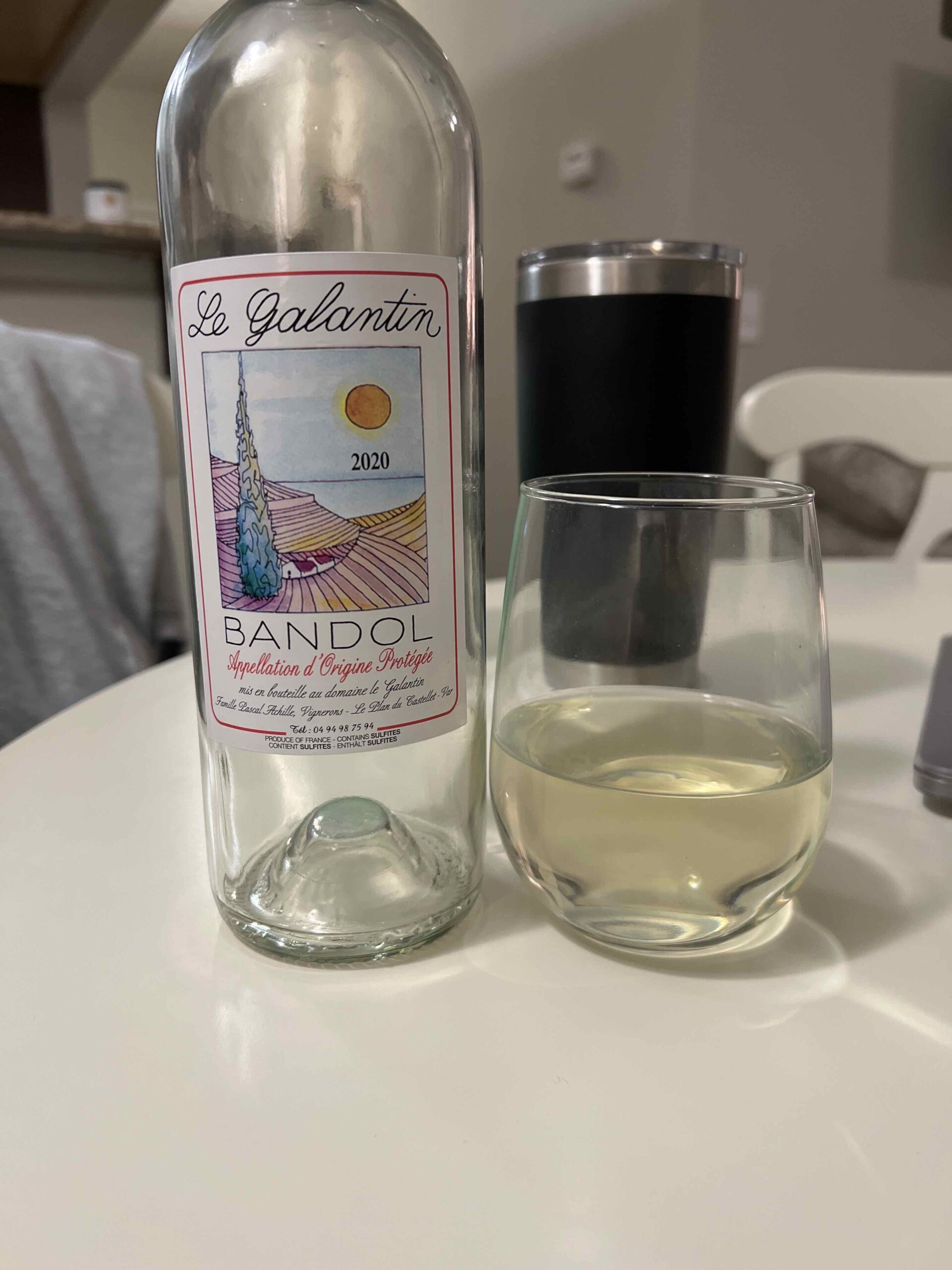 While Bandol is oftentimes associated with rosé and red wine, the Provencal region actually produces a small amount of white wines. This bottle is highly versatile, especially as it gets hotter in the upcoming months. Whether you want a white wine to pair with your lunch or dinner or a bottle for the outdoors, this one is hard to beat. Domaine le Galantin’s Bandol Blanc is light and refreshing while retaining a rich creaminess. Visually, this bottle can be deceiving with its pale color, but the notes and aromatics are amazing. If you find this, get it while you can as only 375 cases were produced. Keep on reading for a more detailed account of the tasting notes, the region, and in this case, an unusual blend of grapes.

Bandol, a small appellation within Provence, sits on France’s Mediterranean coast. The region is surrounded by the Provencal regions of Cassis and Cotes de Provence and is tucked in between two mountain ranges. Bandol is only 33 miles (54 km) from the French city of Marseille. While Bandol has become famous for its Mourvedres and highly sought-after rosé, white wine here is a rarity and only accounts for 5% of the AOC’s wine production.

Bandol is generally a rugged and mountainous area, but it has consistent, prolonged exposure to sunlight and altitude on its side. While the appellation has a variety of soils, the dominant soils in Domaine le Galantin’s Clairette and Ugni Blanc vineyards include limestone and clay.

Making up 60% of the wine, Clairette can commonly be found in white wine blends throughout southern France in the Rhone Valley and Provence. It is one of the oldest known grapes and used to be one of the widely most planted grapes, but thankfully, our friends in southern France are keeping it alive. Its name can be translated to “light” and “thin”, and this reflects the overall style of wine the grape produces.

Ugni Blanc is very interesting here and mostly finishes up the wine at 35%. The grape is most commonly used in Cognac and Brandy production. It is somewhat better known in the wine world by its Italian name, “Trebbiano”, where the grape is believed to have originated. It is known for being high in acid and naturally resistant to plant diseases.

I wasn’t really sure what to expect with this bottle. I loved Mourvedre from Bandol, but I didn’t even know they produced any white wine. It’s not surprising, though, as it only accounts for such a small percentage of what is already a fairly small wine region. I knew Bandol would not let me down, and sure enough, it didn’t. I like to think I have moved on from describing wine with overly dramatic and excessive language, but some wines just can’t be described any other way.

On the nose, there were aromas of pear, melon, and lemon zest with grassy and somewhat floral undertones. The nose was very fragrant and almost even savory in a refreshing way.

On the tongue, the aromas translated over very nicely. There were big hints of lemon, honey, and pear fruits with a grassy undertone. Floral bits were sprinkled throughout, and there was a grassy finish with a tinge of cat pee in the best possible way. This tasty wine was on the lighter side, but the structure and richness could not have been more clear with just enough creaminess and chewiness.

Again, this Bandol Blanc is extremely versatile, as it will do well in so many different settings and scenarios. Whether you are at the pool, out camping, or having fish and salad, this should be your next bottle for the summer.